An awesome minor-league baseball promotion based on “alternative facts.” The parrot who rocks out to Elvis makes me laugh every time. And UConn women lose, and a great men’s title game on track tonight.

It’s usually baseball Opening Day (but since ESPN runs the sports world “Opening Day” is now on a Sunday night, depressingly) but it’s also the championship game of the NCAA men’s Tournament (more on that down below), the ending of the women’s NCAA Tournament (and if you haven’t seen the Shot that Took Down the UConn Streak, you really should; I love it when players I’m taller than do something amazing in sports), and Sunday was also an amazing day for Roger Federer, who continues his shocking rise back to the top of tennis after beating Rafael Nadal yesterday in the Miami Open final.

So yeah, there’s a ton going on in sports. But I want to start today by writing about a minor league baseball promotion that won’t be happening for a few more months.

Why? Because it’s awesome. I love minor league promotions, because they’re always so much more creative than ones in the big leagues.

Anyway, the Erie (Pa.) Seawolves of the AA Eastern League (two rungs below the majors) are having “Alternative Facts Night” on Aug. 25, and this is what it will be: 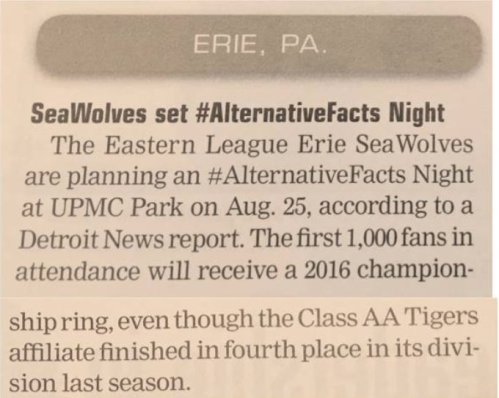 Hahaha! How awesome is that. In the alternative facts universe, finishing fourth doesn’t mean you can’t get a championship ring.

That’s so brilliant. I would totally go to that game.

**And now, a video that’s two years old and somehow this is the first time I’m seeing it. But I’ve watched it four times and laughed every time. The parrot who loved Elvis, and the other parrot who just can’t stand how embarrassing his cohort is.

Watch until the last 30 seconds when it really gets awesome… Parrot just goes for it!

**And finally today, what an incredible weekend of college basketball we just had. Mississippi State slaying the UConn women after the Huskies had won 111 straight games, then two very compelling men’s Final Four games Saturday, where Gonzaga and UNC sneaked through to the title game tonight.

I love, love, love this matchup: Gonzaga has terrific experience and an explosive offense, and a huge Paul Bunyan-like presence in 7-foot, 300-pound center Przemek Karnowski (seriously, the dude is a truck, don’t know how anyone goes around him). The Tar Heels just know how to win, are in the title game for the second straight year (hey, how did last year’s game end up, hee hee), have a fantastic point guard in Joel Berry, and a terrific big man in Kennedy Meeks.

As much as it pains me to say this, and you know it really does, I think the Heels win tonight, 81-74. And then we get “One Shining Moment,” which will take the sting off UNC’s win for me. Always the greatest few minutes of the Tourney, CBS’s great annual montage. Heck, just watching last year’s gives me some goosebumps.