Thoughts on an Emmys show that was all “Bad.” And an Australian hockey player with the weirdest goal celebration you’ve seen 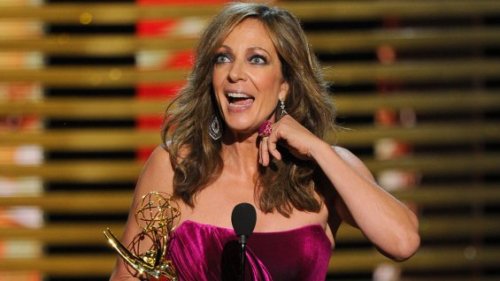 While trying to forget that I ever saw Lena Dunham’s dress, I thoroughly enjoyed Monday night’s Emmy Awards. Sure, there weren’t a ton of surprises, and it seemed like just being a movie star made you royalty at the Emmys, but I thought it as a real fun show.

As usual, my wife joined me in the peanut gallery and so some of these reactions/comments are hers.

—  So glad “Breaking Bad” was so successful: Anna Gunn was amazing in the final season of BB, and despite everyone in the world saying McConnaughey was going to win Best Actor,  Bryan Cranston so deserved it. As so many implored me to do a year ago, if you haven’t watched “Breaking Bad” yet, it’s really time to start.

— Was waiting to see who would do a Robin Williams tribute,  and how sweet it would be. Billy Crystal hit it out of the park. You could tell how choked up Billy got at times, and he was warm, funny and terrific.

— Biggest upset of the night? I think it was Julianna Margulies beating Claire Danes, Lizzy Caplan and Robin Wright for best actress in a drama. And Margulies’ speech was sweet, too. (Wife’s comment: “Damn her husband looks young.”)

— Shouldn’t Stephen Colbert be hosting the Emmys or Oscars sometime soon? He’s fantastic. And his bit with Jimmy Fallon after Colbert won was pretty hilarious.

— Seth Meyers, who I don’t normally think is all that funny, did a really good monologue. His jokes about HBO being the friend you should’ve been nicer to as kids was really good, and I loved the “Duck Dynasty” is the most VCR-taped joke, too. Thought it was a little weird that he seemed to keep trying to justify that the Emmys and TV are important; sounded a little needy.

— Wife and I were both completely puzzled by Alison Williams’ dress. No idea what the hell was going on there with the “Girls” actress, but it looked like a white animal had strangled her body.

— “The Normal Heart” thankfully got its kudos by winning Best Movie, and I love that Larry Kramer, sick as he looks, got to go on stage for that moment. The movie got totally hosed in the acting department, though; definitely  Matt Bomer and Mark Ruffalo should’ve won in their categories.

— What the hell was that mustache on Cranston? But his full-on makeout session when Julia Louis-Dreyfus won was hilarious.

— Sarah Silverman winning over Amy Poehler/Tina Fey and Billy Crystal? Yeah, that was a shocker.

— Is there a reason we need to have the accountants announced at these awards shows? I mean, are we really in need of reassurance that these things aren’t fixed?

— Apparently red was the color every actress agreed to wear, my wife said. Hey, every woman looks good in red.

— Umm, what was under Kerry Washington’s dress? It looked like black metallic underwear.

— Yay Allison Janney winning for “Mom.”   It’s really a wildly funny show you should check out if you haven’t yet. What an awesome career Janney has had.

**Finally today, it’s late August so of course you’re looking for an awesome hockey highlight: This is Australian hockey player (a phrase I’ve never written before!) Ric Del Basso, scoring a game-winning shootout goal and then trying to skate backwards on his head.

I think the announcer said it best: “Win the game and try to give yourself a brain injury!”