Many thoughts from a fabulous first week at the U.S. Open. And Bernie Sanders vs. punching bag makes me laugh 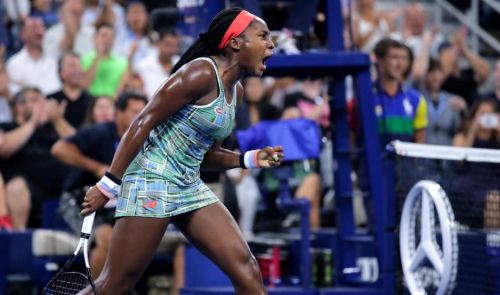 Whew. I am happily exhausted today, after seven glorious days spent walking the grounds, and writing up a storm, at the U.S. Open.

So much has gone on, so much still to come, as I’ve been swept up in Coco-mania, severely disappointed a man I didn’t even know, and watched as much tennis as I could.

Many thoughts from my exhilarated brain, and man am I super-fortunate I get to come to this thing every year:

— So I have to start with Coco Gauff, the 15-year-old phenom/human excitement machine who won two? matches this week in thrilling fashion, and was the talk of the first week.

I’ve been covering her since two days before the tournament for the Palm Beach Post, and it’s been… quite something. Talking to her parents, her coaches, etc., they’re all kind of riding the wave of something they can’t believe is happening this quickly.

It’s really wonderful catching a “new thing” when it hits tennis: Everyone is so humble and gracious when they’ve never had this much attention before, and from all my interactions with Coco and her family, they seem like genuinely nice, grounded people.
You hope they always stay that way. What a tremendous kid Coco is, and a player with so much potential. Her length, her athleticism, how quickly she reads her opponents’ shots… she’s going to be some kind of superstar player.

But let’s all take a deep breath and remember: She’s only 15. She was born three years AFTER 9/11.

— And oh yeah, this happened after her match with Naomi Osaka. Such incredible sportsmanship, humanity, and class from Osaka. Just beautiful:

The 2019 #USOpen has been so fun! Everyone is speaking their mind and picking fights and and it’s the best thing ever, we need much more…oh…wait….this is just the sweetest and classiest thing ever and we need more of this!pic.twitter.com/3q8KOaQgcE

— So this was funny: I’m covering the Coco Gauff-Timea Babos second-round thriller Thursday night and, during a changeover, a guy walks past me from a few rows in front of me.

All of a sudden he stops dead in his tracks when he sees my credential.

“Ohmygod are you Michael Lewis the “Moneyball” guy?” he shrieked.

“No, sorry, just a fellow writer with the same name.”

His face dropped, he took a sip of his alcoholic beverage, and started walking away.
Sorry dude. I have to say, getting confused with the other ML happens all the time on social media, but rarely in real life.

— Besides Coco, there were a ton of other surprising success stories from American players this week, including two out-of-nowhere: Taylor Townsend, a former teen phenom who has struggled with inconsistency and injuries  the last several years, made the fourth round after having to qualify and win three matches just to get into the Open, and Kristie Ahn, a “journeyman” player who’d never won two matches at a Slam, getting to the fourth round, thrilling everyone except her own parents (read this as to why they’re mad).

— Random celebrity sightings this week, non-tennis edition: Walked right past NBA legend Kobe Bryant on Friday (he was there promoting a book or something), and Wednesday I was in the midst of Ben Stiller for about 10 seconds.
Nothing tops the two tennis legends I was lucky enough to briefly talk to, though: Rod Laver and Billie Jean King. She is, without a doubt, the greatest, and one of my all-time heroes.

— So this was one of my favorite moments of the first week: Russian Daniil Medvedev, the No. 5 seed, acted like an ass on Friday night, snatching a towel angrily from a ballboy and covertly giving the middle finger to the chair umpire, who only saw it on the JumboTron replay after the fact.

Anyway, the crowd booed Medvedev something fierce the rest of the match, and after he won, he said this.

What an awesome WWE villain he’d be!

— Finally on the tennis, noticed this week that are like, zero, American chair umpires. Every single one has some kind of foreign accent.
It’s not a problem, of course, tennis’ diversity is fantastic. Just odd that our country doesn’t seem to produce tennis chair umpires.

**And finally today, a moment of Zen, as they used to say on “The Daily Show.” Here’s presidential candidate Bernie Sanders, attempting to hit a boxing punching bag.