R.I.P. Dean Smith, a giant on and off the court. Animals frolicking happily in great new commercial. And some thoughts on the Grammys. 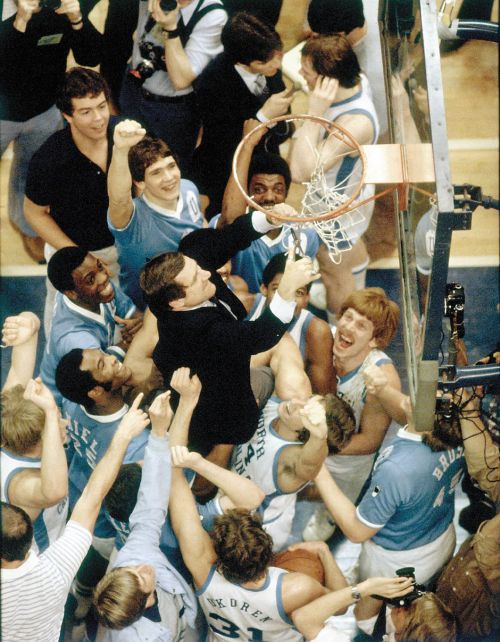 During my years as a sports journalist, I had the opportunity to meet hundreds of athletes, coaches and administrators, as well as many non-sports celebrities.

Most of them were perfectly nice, decent people. A few were Grade-A jerks.

Not one of them ever had the class, grace, and humility of Dean E. Smith, the legendary coach of the University of North Carolina basketball team.

Dean died Saturday night at age 83, after a long decline due to dementia. I’ve written about Dean, a man I admired as much as anyone I’ve ever met, before on this blog, here and here., and there were a ton of fantastic tributes to him published Sunday (I highly recommend Alexander Wolff’s on SI.com, and this great Tommy Tomlinson story from last year.)

Many of those tributes talk about Smith’s incredible coaching acumen, his invention of the Four Corners offense, the trips to the Final Four, and his two national championships.
But what’s so more important about the life he lived was what he did off the court. He fought tirelessly for civil rights in North Carolina, long before he was famous and successful and people had to pay attention to him. He battled and spoke out against the death penalty and segregation; battled for women’s rights, and myriad other causes he believed in.

He had an incredible memory for names and facts, he was a master motivator (he’d tell nervous players in the huddle late in close games, “Hey, a billion people in China don’t care who wins”)

There were so many great Dean anecdotes about who he was, but this one, from the NBA’s Reddit page from an unattributed source, might be my favorite.

“Way back in 1958, when Dean Smith was just an assistant coach at UNC, he was angry that restaurants in Chapel Hill were still segregated. He decided to make a statement by walking in to a eatery he knew, sat down with an African-American player, and ate a meal. And a blow for desegregation had been struck.

When it was brought to Dean years later that he should be proud of what he did, this was his response.”

Dean Smith’s death is not a loss for college basketball. It’s a loss for humanity.

**Next, this ought to put a smile on your face. The Android company has put out a new ad that has gone viral very fast, with more than 4 million hits already. It’s just footage of different animals from the kingdom, frolicking and, well, getting into some interesting situations. 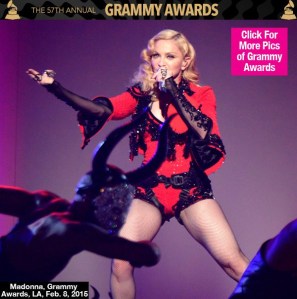 **Finally, a couple quick thoughts on Sunday night’s Grammy Awards, my annual attempt to reconnect to today’s music and extricate myself from my 1980s and early ’90s musical dungeon I happily reside in the rest of the year:

— I’m just asking: When did LL Cool J become to the Grammys what Billy Crystal and Bob Hope were to the Oscars? I mean, is he just the permanent host now?

— Sam Smith and Adele both say “Fank You” and it’s kind of adorable.

— Madonna is 56. And damn, she’s still got it. What an amazing performer she still is.

— I’m not a Katy Perry fan, but her performance, preceded by a domestic violence survivor telling her story, was powerful.

— The Grammys always have some bizarre-looking celebrity outfits, but Jesse J’s dress looked like it was pasted together by a drunk 3rd-grader in art class.

— Kanye West: Could he be a bigger tool? He tried to interrupt Beck like he did Taylor Swift at the VMAs all those years ago. His ego knows no bounds.

– I hate the Bee Gees more than I’ve ever disliked any other musical act, ever. But hey, give ’em a lifetime achievement award, lots of other people liked them.

— A week ago, New England Patriots defensive back Malcolm Butler was a rookie from West Alabama, playing in his first Super Bowl and completely anonymous to 99 percent of the world. Seven days later he’s a Super Bowl champ and on stage presenting a Grammy.
America, what a country,

— Last year’s Grammys, with the incredible Ryan Lewis/Macklemore/Queen Latifah same-sex wedding ceremony at the end, was pretty impossible to top. But I thought Sunday night’s were pretty good.

Hockey at Yankee Stadium looked awesome. The Grammys were awesome this year. And Nadal is stunned at the Aussie Open 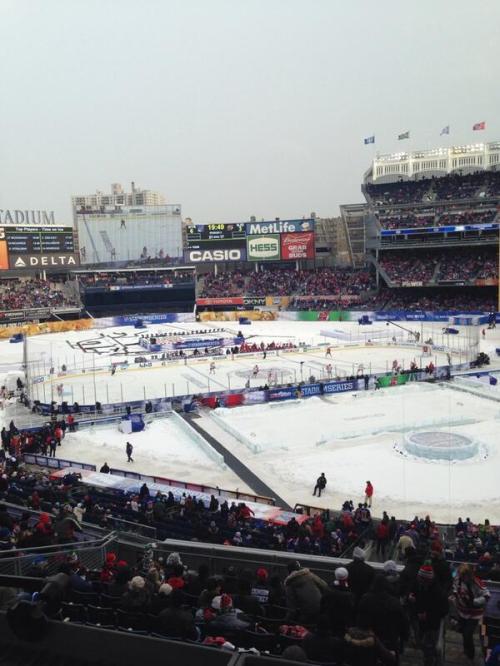 Pretty terrific Sunday, headlined by the New York Rangers kicking the tushies of the New Jersey Devils before a crowd of 50,000 at Yankee Stadium in the first-ever outdoor NHL game in New York.

Was asked a bunch of times leading up to Sunday if, as a die-hard Rangers fan, I was going to see this live. Each time I replied “Are you crazy? Sit in 20-degree weather, 500 yards from the ice, and pay hundreds of bucks to do it?”

Nah, I had a pretty great seat in front of my TV in my warm apartment. The visuals on TV were, of course, stunning, especially when it started snowing midway through the game.

Big win for the Rangers, and very cool that they knocked out Devils “starting pitcher” Brodeur after scoring six goals on him.

I really hope the NHL keeps these outdoor games to one or two a year, because each one this year has been special.

**Next up,  I say this every year when I blog about the Grammys: I know almost nothing about current popular music, and I’m OK with that. My wife has vastly broadened my knowledge, but still, I’m in no way qualified to comment on the music that does or doesn’t win Grammys.

I can however, happily comment on other aspects of the show, such as:

–Wow. That Macklemore/Ryan Lewis/Queen Latifah/Madonna/Mary Lambert performance near the end of the show, with the awesome “Same Love” song playing and 34 couples getting married live in the Grammy audience? Best thing I’ve seen on an awards show in many, many years. Just a chill-bump-inducing moment, about how far we’ve come in America. I may need a whole separate blog post tomorrow to talk more about this. Two quick thoughts:
A, If Archie Bunker were alive today, his head would’ve exploded at that, and 2, why did Madonna feel the need to dress up like Dolly Parton in “9 to 5?”

— Also, I’m not the only one who thought Macklemore looked a little too much like Vanilla Ice, am I? And has it ever been established which one is Ryan Lewis and which one is Macklemore?

— My mother was quite upset at the “stupid song” Mrs. Carter and her husband sang to open the show. “How can they sing about something that bad?” she hissed at me. (On the other hand, my father-in-law’s response: “Beyonce looked fabulous, who cares what she sings?” Ah, ‘Merica.)

— Must echo what so many else said on Twitter when it happened: Robin Thicke performing with Chicago may have been the whitest moment in pop music history.

— Taylor Swift really is a pretty fantastic singer, and a great talent. I just feel like she tries too hard at awards shows to seem earnest. And she looks totally ridiculous when she dances.

— I have no idea who Kendrick Lamar is, but that performance was super-intense.

— That said, Pink kicks her, and everyone else’s, ass. Another awesome performance from a woman I got to see live twice last year.

— Do you think LL Cool J wears that outfit every Saturday night, or just for the Grammys? 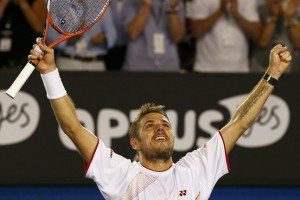 **And finally, the Australian Open men’s final threw me and every other tennis fan for a loop Sunday morning. Rafael Nadal, who looked so indomitable at the Open this year, and destroyed Roger Federer Friday, surely was going to beat Stan Wawrinka, a Swiss player now in the Top 10 but not nearly in Rafa’s class.

And yet… amazing things happen in sports sometimes. Like Wawrinka dominating the first set, and going up a break in the second. And then Nadal hurting his back on a serve, and being unable to move, and being down two sets.

And then Rafa, an unbelievable fighter and competitor, somehow hanging in and getting a set, and even at 2-2 in the fourth. But he just couldn’t move much at all, and Wawrinka pulled it together to win a most-unlikely Aussie Open.

Shocking, that someone other than the Big 4 in men’s tennis won a Slam. Shocking, too, that it was Wawrinka, who never before seemed to have the stones to win 7 matches at a major.

This was great for tennis to see someone else break through the Big 4 monopoly. Sure, Nadal’s practically a lock for the French, but who knows?

A great night at the Emmys. And rude service-people do so much damage 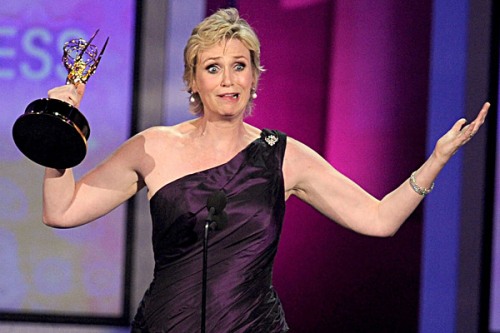 Love the Emmy Awards. Always one of my favorite TV nights of the year. And yet I’m always disappointed and angry when my favorite shows don’t win.
Except Sunday night, they almost all did. Stunning to see quality rewarded. Thrilled that “Modern Family” and “Mad Men” both took home the big prize.

A few rambling thoughts from my brain from last night’s show, which I found very entertaining:

**Very nice job by Jimmy Fallon. Surprised at how good he was. The opening sketch was great, and I loved Fallon’s musical tribute to the three shows that went off the air. Brilliant.

**Jane Lynch had to win for her role in “Glee.” I only wish she wore the track suit and did a “Sue’s Corner” while she was up there.

**Great speech by Eric Stonestreet, Cameron from “Modern Family.” I loved that he said he’s giving the Emmy to his parents so they can see it every day “and realize what they made possible for me.” Very touching.

**January Jones is beautiful, but that was a pretty awful dress, I think.
**And Lauren Graham, sweetheart, I love you, but what the hell were you wearing? Not good.

**So glad Al Pacino won for the Jack Kevorkian movie “You Don’t Know Jack.” Although that was a rambling, weird speech, Al.

**I’m a huge fan of the death montage every year, and I loved this year’s, with Jewel singing along with it. But Dennis Wolper is the last person we see? He’s the most important death of the last year? And yeah, I moaned a little seeing Boner Stubone and Corey Haim in the montage. So sad.

**I like George Clooney more and more these days, because he can laugh at himself. That’s rare with famous people.

**Guess I should see that “Temple Grandin” HBO movie. I think it won like 412 awards.

**Finally, a long overdue win for Jim Parsons, Sheldon on “The Big Bang Theory.” Such a great show, and such a great part. Really, it was a terrific night for people who like good TV. 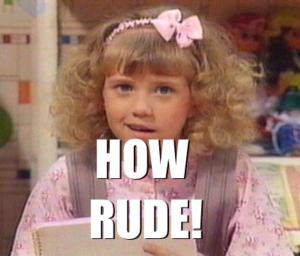 **So I found myself in a department store in the mall the other day, and I had a pretty crappy experience with a saleslady.
This woman was rude, dismissive of the story I told (that a product I was told was in stock by another employee a short time earlier on the phone, now wasn’t in stock, it appeared), and just extremely off-putting.

And I wonder if she realizes how uncomfortable she made the situation for me. And how I simply won’t shop there again, because of her attitude. And that for all she knows I could be a big spender.  Just like I would patronize a store that gave me great customer service, just because they were nice, customers like me avoid stores because of one bad attitude from one employee.

I know retail work isn’t easy; I’m not saying every person should be as enthusiastic and helpful as Richard Simmons on a case of Jolt cola (do they still make that?).

But the damage one person can do to a store’s reputation is unbelievable.