Good News Friday: 80 people form a human chain to save a family from drowning. A farmer in Iowa builds a Wimbledon Centre Court replica, and it’s awesome. And a moving tribute to Eunice Kennedy Shriver, from Michelle Obama

And a Happy Friday to all of you out there in Internet-land. So much I want to say about L’Affair Trump Jr., but it’s Good News Friday and we’re keeping it positive as always here today.

OK, first up, we’re nearing the end of Wimbledon, with the men’s semis today starring my man Roger Federer, and the women’s final, featuring ageless 37-year-old Venus Williams (what an amazing story she is) coming up on Saturday.

Well, from the great Steve Hartman of “CBS Sunday Morning,” this is a story so far up my alley, I’m kind of amazed I didn’t know about it until now.

You remember “Field of Dreams,” of course, the movie about a man who hears a voice from above telling him to build a baseball diamond in the middle of Iowa cornfields.

Well, this story takes that one step further, and it’s all real. A man named Mark Kuhn heard a tennis match on his grandfather’s old transistor radio as a boy, and the BBC call of Wimbledon had the young child transfixed.

Kuhn’s obsession with the greatest tennis tournament in the world led to him building, in his Iowa cornfield, a replica of Wimbledon’s famed Centre Court back in 2002.z

Seriously, he built it in his cornfield. And children of all ages now come to hit serves and backhands on his exquisitely beautiful court. That’s right, he’s got the All Iowa Lawn Tennis Club, and all you need to play is a love of tennis and a court reservation.

Mark, you’re my hero. And next time I’m anywhere NEAR Iowa, I’m coming over to play a set. 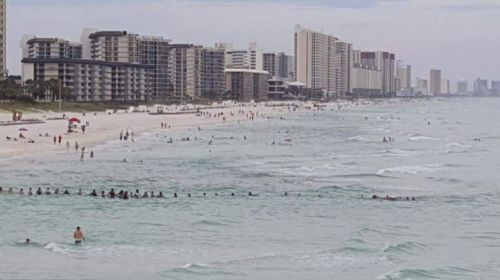 **Next up today, this story went viral this week for very good reason. Approximately 80 beachgoers in Panama City, Fla. noticed Roberta Ursrey and her family in major trouble in the ocean last Sunday, as a very strong rip current prevented nine people from swimming back to safety.

So slowly but surely, more than six dozen strangers began forming a human chain from the sand out to the Ursrey family, and managed to rescue each one of them.

Complete strangers, bonded together in a moment of crisis, became heroic. So, so wonderful.

“It’s so cool to see how we have our own lives and we’re constantly at a fast pace, but when somebody needs help, everybody drops everything and helps,” said Jessica Simmons, who was one of the first people to try to rescue the swimmers. “That was really inspiring to see that we still have that.

“With everything going on in the world, we still have humanity,” she added.

And may we always have that, please.

**Finally today, this was an incredibly moving and uplifting story from this week’s ESPY Awards. Eunice Kennedy Shriver was one of the greatest Americans of the 20th century. She was JFK’s sister, but more importantly, she was a driving force behind the creation of the Special Olympics, an incredibly vibrant and important organization that has helped millions of special needs boys and girls have one place where they can shine and stand out.

Michelle Obama, who I miss having on the national stage terribly, narrated this fabulous look at Shriver’s life, and accomplishments. This is so worth it, just to hear the boys and girls whose lives have been changed by Special Olympics talk about what it’s meant to them.

What an amazing woman she was.