Thoughts from the first few wild days at the Olympics. And “The Dark Knight Rises:” A ridiculous but entertaining flick

It’s been a pretty wild first few days of the Olympics, hasn’t it? Maybe it’s just me, but I feel like a whole lot has gone on the first few days, since Queen Elizabeth jumped out of an airplane on Friday night. It’s been exhilarating and sad and awesome.
Tried to watch as much Olympics coverage as I could, so some quick-hitting thoughts on what has gone down the first 48 hours or so:

— Gotta start with my man Ryan Lochte, who as I’ve said before, I covered for 3 1/2 years when I worked at his hometown newspaper in Daytona Beach, Fla. He was phenomenal Saturday in the 400 IM, cruising to a gold medal and leaving Michael Phelps in the dust, in fourth place. It was stunning to see how far off the lead Phelps was; NBC had to widen the camera shot just to get him in the frame for the last 100 meters. It was a dominating, no-doubt win for Lochte, and I was happy for him.
Then Sunday night, swimming a race he never swims (the 4×100 freestyle), Lochte was overtaken on the final lap by France and the U.S. had to settle for silver. I’m sure Lochte will get criticized a little, but silver’s about what the U.S. expected in that event.

— My every-four-years rant: Dear NBC: It’s 2012. Stop tape-delaying LIVE events and holding them for prime time. Frustrating trying to watch races on the computer and have it keep freezing. I mean, I know why they do it (advertising dollars go up in prime time), but come on, you can’t tape-delay sports in 2012! Thank you.
— So, the Opening Ceremonies: On a weirdness scale of 1-10, I’d give it a 43. Dancing doctors and nurses? Rings of fire in the sky? The Queen skydiving (OK that part was cool)? God bless the Brits for going for it, but man, it was hard to follow.
— I found the men’s team archery on Saturday wildly interesting, after never watching the sport before. It’s amazing how quickly you get invested during the Olympics; I was yelling at the TV for that U.S. guy Kaminski to PLEASE hit the gold “10” number at the end. At the finish, the heavyset Italian guy got the 9 point shot (is it called a shot?) he needed, and the U.S. had to settle for silver.

Still, it was exciting.

— NBC showed no compassion for poor Jordyn Wieber Sunday night; the American gymnast was the huge favorite to win the all-around competition, only because of Olympic gymnastics’ bizarre scoring system of only 2 competitors per country making the finals, Wieber didn’t make it.
So NBC decided to show her crying on camera a bunch of times, following her as she walked off the floor, then stuck her in front of America for an interview. I know, I know, it made for good TV. But I felt really bad for her. 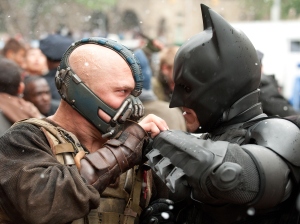 **So I rarely ever see big summer blockbusters, but my fiance and her family really wanted to see “Dark Knight Rises” Saturday night, so off I went. It was … entertaining and ridiculous and everything a summer blockbuster is supposed to be.
And while I was highly confused for much of the flick, and laughed at its ridiculousness at many points (here’s one question: So Batman’s got all of these high-tech weapons and a cool vehicle and all that, and his enemy in the film is also pretty futuristic, and yet how do they settle their differences? By punching each other really hard in the face), it was still worth the price of admission.

Couple thoughts:
— Anne Hathaway was really good in this. I don’t usually like her in movies, but she was a superb Catwoman.
— Christian Bale spent much of the money looking sad and frustrated. He does that in every movie, right?
— I know it was a few thousand miles, and a week, away, but I’m not going to lie: Sitting in that theater watching that movie Saturday, I thought of the Aurora shooting. I tried to rid that image from my mind, but it kept coming back.

Still, all in all, a pretty good flick with some cool special effects and a great plot twist toward the end. There was even some humor thrown in so the whole thing wouldn’t be so dark.