An awesome baseball catch and a damn persistent moth. And terrible news about the great Pat Summitt. 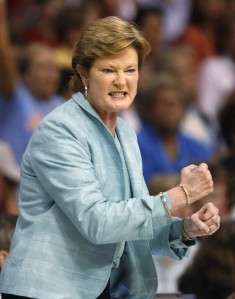 Let’s start off Wednesday with a clip from a show I miss dearly, “The West Wing.” Just because…

**There doesn’t seem to be much drama left in the baseball season’s pennant races; the Yankees and Red Sox are both making the playoffs, and the other divisional races are pretty blah (except for the NL West).
But these two things caught my eye Tuesday. First, check out this incredible catch by Ben Revere (is it too much to ask for his parents to also have a son named Paul?) of the Twins.

And then there was this. Matt Holliday of the St. Louis Cardinals had to leave a game Monday night when a moth flew into his ear and got stuck there. I wish I were making this up, but check out the bizarre details here.

**Finally today, spare a thought for maybe the greatest basketball coach who ever lived. Pat Summitt, the 59-year-old force of nature who has led the University of Tennessee women’s basketball team for the past 38 years, was recently diagnosed with early onset Alzheimer’s Disease. It’s a horrible blow to one of the most indomitable people ever in sports (if you want a great picture of how driven Summitt is, read this fantastic Gary Smith Sports Illustrated profile of her from 1998), and a coach who has molded so many lives for the better.
Sportswriter Sally Jenkins calls Summitt her best friend, and it was to Jenkins who Summitt broke the news of her disease.

Here’s Jenkins’ beautiful story today in the Washington Post about her friend Pat Summitt. It’s tragic and wonderful, like the best writing often is.

The enigma that is Alex Rodriguez. And a few words about Larry King

That’s always been my reaction toward Alex Rodriguez. There are so many things you could dislike about the highest-paid player in baseball.

He’s smug. He’s arrogant. He cheats on his wife. He’s selfish. He takes steroids. He shamefully, and without any real remorse, accused a highly-respected reporter named Selena Roberts of sneaking around his mansion in Florida and stalking him, a completely baseless and disgusting charge.

Then, though … you see him play baseball. You see how effortless this game is for him.  You see his beautiful stroke, his solid glove, how he seems to be a pretty good teammate. And then you watch him struggle for five years to gain acceptance from Yankees fans, maybe the most spoiled and hard to please folks in the world.

I truly never thought of A-Rod as a Yankee; as a fan of the Bombers, I took him the same way I took Roger Clemens: I hate that I have to root for him. But I root for a team, and if he’s on that team, then I guess I have to bite my tongue.

Only this October, Yankees fans have embraced him. He’s getting cheered as he’s smacked big hit after big hit. It was like, as many have pointed out, a giant weight (or a large bag of syringes) has been lifted off of him, and he can finally play as free and easy in the pressure moments as he does when it’s 9-3.

Now, A-Rod gets his first World Series shot. Is he still a jerk? Probably. Am I pulling for him? Yes. Do I wish he was on another team? Certainly. Does he enter the Yankees pantheon if he leads them to a title? I’m not sure. He’s got a long way to go on that contract of his.

Rodriguez is a hard guy to like. But for the next 10 days, I like him. That’s life as a sports fan.

***So the World Series starts today, and it could be one of the best in a long, long time. For my money (which isn’t much; hey, I’m a journalist), the most memorable World Series that I’ve ever seen was the 1991 classic between the Minnesota Twins and Atlanta Braves, won by the Twins in a 1-0 Game 7 classic. Coming in second was the Yanks-Diamondbacks 2001 Series, what with the exciting games and all the other outside world issues swirling around.

My prediction? The Phillies are absolutely loaded offensively, and in starting pitching. Cannot wait to see Pedro Martinez pitch in Yankee Stadium. The Yankees are loaded, too, with a slightly better offense.

These teams are so close, but I give the edge to the Yanks, in 6 games, for 1 reason: They have Mariano Rivera, and Philly doesn’t.

**Another of my random musings: Was at a high school volleyball playoff match tonight, between two local high schools. It was a good match, exciting and it went the distance, but that’s not what got me thinking. I kept noticing how incredibly happy the Deltona High assistant coach, Laura Smith, seemed. She was pumped up when her team was losing. She was pumped up when they were winning. She was constantly exhorting, smiling, and cheering. Several times during the match she turned to the scorers table and said “Isn’t this so exciting?”

Rarely do you see someone so happy about their job, while they were doing it. It was kinda cool to see. 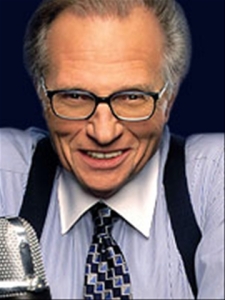 **Finally, my man Larry King had Hulk Hogan on his CNN show Tuesday night. I was oddly compelled to watch it for a few minutes, whereupon Larry, God bless him, called Laila Ali Muhammad Ali’s wife, not his daughter.

Larry King should be in a museum one day, stared at and puzzled over like an old fossil. The man has been on TV since there’s been such a thing, he always manages to entertain himself and his guests, and he’s never once asked a tough question. He’s truly a marvel.

Also, talking about Larry King allows me to link to this hilarious piece from Jon Stewart, written long before he was the host of The Daily Show. It’s from his first book, and the essay is called: Adolf Hitler: The Larry King Interview. Truly hilarious stuff; give it a listen, it’s only 5 minutes long.

Baseball sucks me back in, a great film about the Great Gretzky, and Wilford Brimley raps (seriously) 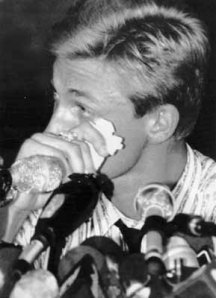 Well, all right baseball, you’ve got me for another October.

My very first post on this blog was about how I’d pretty much broken up with baseball. College basketball, hockey, tennis and the NFL had all moved ahead of the sport I played in Little League (right field, thank you. You get a LOT of time to think out there in right field, let me tell you. A lot of time.).

But as I figured, all it took was one exceptional playoff tiebreaker game to suck me back into the vortex. Tuesday night’s Twins-Tigers game was thrilling; back and forth, and forth and back, extra-innings drama that had plenty of screw-ups and great plays, one after another.

I was rooting for the Tigers at first, because don’t the people of Detroit deserve some joy after the last couple of years? But then I thought that a team that had collapsed down the stretch as bad as any team since, well, the 2007 or 2008 Mets (sorry, Mets fan readers. I know the wound is still fresh), doesn’t deserve to be in the playoffs.

The Twins pulled it out in 12 innings, and I’m happy for my relatives who live in Minnesota (shout out to the Haas family!). The horrible, ugly, louder-than-loud Metrodome gets to live one more week.

Of course, now the Yankees of New York will proceed to kick the ever-loving hell out of the Twins, as always happens in the playoffs (2003, 2004). The Twins haven’t beaten the Bombers once this year, losing all seven games, including three in excruciating, walk-off fashion back in May.

Plus, and as a Yankee fan I take perverse delight in this, the Yankees get to face Carl Pavano, who may have been the worst Yankees free-agent signing ever (and believe me, that’s not an easy list to top.) I’m guessing old Carl (Everything Hurts) Pavano will pull a calf muscle 10 minutes before his playoff start.

By the way, hell of a few days in the Twin Cities. Monday night Favre and the Vikes beat Green Bay, then Tuesday the Twins win a dramatic game to make the playoffs, and just for good measure, the NHL’s Wild come back from 3 goals down in the third to win their home opener, 4-3.

**Quickie playoff predictions, free of charge: Yanks over Twins in 4, Rockies upset the Phillies in 5 (just a hunch), Angels over Red Sox in 5, and Cardinals over L.A. in 3 (too much pitching).

**So there are plenty of reasons to bash ESPN, and I’ve hardly abstained in the past. It’s a great channel and I can’t imagine life without it, but there are plenty of things it screws up (the fact that they steal stories from other media outlets and claim them as their own, for example).

Still, I can’t remember the last time I’ve been this excited about something the network is doing. To celebrate its 30 years on the air, ESPN commissioned 30 filmmakers, from Spike Jonze to Barry Levinson to Steve (Hoop Dreams) James, to make a one-hour documentary on some famous, or not-so famous, sports story in the last 30 years.

It’s called “30 for 30,” and the list of upcoming films is incredible. So many great things on here I want to see: the Reggie Miller vs. New York Knicks feud is in here, and the story of the rise and fall of the USFL. A documentary on the late great Len Bias, and a movie about June 17, 1994 (something about O.J. and a white Bronco springs to mind). The Allen Iverson bowling-alley brawl trial, which was such a huge deal at the time and now no one remembers it.

Truly, I went down the list and all the movies seem compelling. The first one premiered Tuesday night: “King’s Ransom,” about the maybe most important transaction in NHL history: Wayne Gretzky’s 1988 trade to the L.A. Kings. This was cataclysmic on so many levels; I remember as a kid being completely dazed, wondering how the hell the greatest player ever could just be traded. This was so huge in Canada; picture how Brooklyn Dodgers fans felt about Walter O’Malley in the late 1950s, then multiply it by 10, and you’ve got how Oilers fans felt about owner Peter Pocklington for trading the Great One.

The movie did not disappoint; I highly recommend catching it on the reruns. The series will run once a week until next March.

**And now, for our grand finale, Wilford Brimley rapping about his “diabeetus.” Thank you, Andrew Sullivan, for directing me to this: