Someone’s going to get killed at a Donald Trump rally, and soon. What a real “parent fantasy” sounds like. And the craziest opening weekend of March Madness, EVER 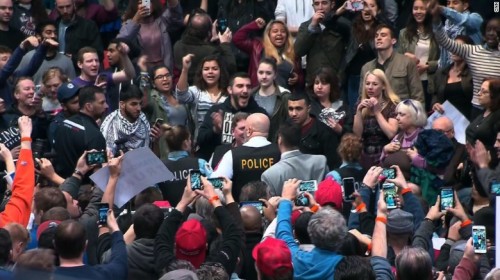 I don’t say this lightly, or flippantly, or because I’m trying to drive up pageviews on my blog.

I really and truly believe it: Someone within the next few weeks or months is going to get murdered at a Donald Trump public event.

I can’t believe I’m saying this, that in America in 2016, we have this incredible powder keg of circumstances that have conspired to make me think this.

But this is what we have: A Presidential candidate, the frontrunner for one of our two major parties, who lies, blusters and incites violence. A candidate who draws thousands and thousands of Americans to his rallies, people who may already have their own prejudices and predilection toward violence.

A candidate who then, from the stage every chance he gets, stokes hatred and violence. And tells those followers that they should “punch someone in the face” or “have them taken out on a stretcher” or says “I’ll pay your legal fees” if you beat someone up.

And what do you know, the acolytes listen and take their cue from their leader. And then the candidate throws up his hands and says, in effect, “What do you want from me? I’m not telling them to do it. And the protesters started it!”

There was more violence at Trump events this weekend, in Arizona and elsewhere. So far the injuries have been minor, and the police have been there to break it up, but this shit is not going away. Not anytime soon.

And pretty soon, someone’s going to have a concealed gun at one of these rallies, or in the parking lot, and tempers will flare, and the gun will go off, and people will be shocked (SHOCKED) that this could happen.

I won’t be. You shouldn’t be either. This is what happens when a person adored and worshipped by thousands and thousands encourages violence.

And it’ll be a goddamn shame when it happens. Just don’t be surprised.

**Next, my good friend Amanda pointed this video to me a few weeks back, and I’m sure all parents of babies/toddlers will appreciate the humor. It’s a short skit from the comedy team “Hamish and Andy” called “Parent Fantasy hotline,” and it illustrates exactly what kind of fantasy new parents really would enjoy…

**Finally… I don’t know what to say. I’m speechless. I am without speech. I’m sitting here at 11:16 p.m. Eastern having just watched the most epic collapse in NCAA Tournament history. Probably in basketball history.

If you don’t know what I’m talking about, the University of Northern Iowa had a 12-point lead with 44 seconds left over Texas A&M Sunday night. I mean, it was over. There was a better chance of a meteorite striking the arena than there was of the Aggies coming back.

And yet, they did. Texas A&M scored 12 points in those 44 seconds to tie the game, then won in double overtime.

It was epic. It was improbable. And it capped off probably the greatest, most exciting first weekend in NCAA Tournament history.

I know, I know, “recency bias” affects all of us. Everything that just happened we proclaim the greatest ever. But this time, it’s true.

We had buzzer-beaters. We had last-second layups. We had dramatic 3-pointers for the win (Wisconsin last night over Xavier). Hell, last night’s game wasn’t even Northern Iowa’s most dramatic game of the weekend! That came Friday night (above), when Paul Jesperson hit a half-court heave at the buzzer to win.

So much incredible action went on, I can’t even begin to recap it. My brain is mush right now, so if some of this doesn’t make sense, my apologies. But some quick-hit thoughts from the weekend:

–Gotta say a few words about my favorite team. Duke tried really hard to blow that 20-plus point lead against Yale Saturday. This Blue Devils team is very fragile, with a huge swing between being great and being awful always nearby. I have said repeatedly that given what this team lacks, making the Sweet 16 was all we fans could hope for. Now they’ve made it; everything else is gravy.

— I so wish Gus Johnson had been calling that Northern Iowa ending, either Friday night or Sunday night. Then again, nah. He would’ve had a heart attack at the end of regulation and they’d have had to revive him during the OT’s.

— Villanova is looking scary good. Kansas, too. And Gonzaga, they were the most impressive team I saw all weekend.

— Not sure who knows less about a topic they discuss all the time on TV: Charles Barkley on college basketball, or Donald Trump on world affairs. We all love Barkley’s personality, but could he watch, maybe one or two college games before March when he’s on TV all the time analyzing?

— Thank God there are no more games now until Thursday. I need a few days to recover.