And a Happy Friday, my fellow readers of words written on screens! It’s colder than Donald Trump’s heart here in New York this week; this is gonna sound random but is the time of year when I miss David Letterman’s late-night TV show the most, because he’d always come up with some good one-liners about how cold it is in New York, like something like “It’s so cold even the hookers in Times Square are wearing earmuffs” but something better than that, obviously.

Anyway, it’s freezing here. On with the show.

A Baby Crawl Race for the ages!

What a dramatic finish! 😂 pic.twitter.com/Wy0QKaJBKk

Lots of good news this week, and I want to start with a piece of NBA halftime entertainment that made me laugh out loud.

So at a New Orleans Pelicans  game last week, they held a “baby race,” where they get a bunch of infants together on the floor, put their parents about 20 feet away, and have a “race” to see which little wee one gets to the finish line first.

This is the most dramatic and awesome baby race I’ve ever seen. No. 6 looks like a clear winner, all the way until… just watch it. And if this three-minute video doesn’t make you smile, especially with the dramatic twist, well, I give up.

**Next up, I love, love love me some Sheryl Crow. And I also love Stevie Nicks. The two of them once performed a duet of Crow’s iconic “Strong Enough” and it just about made me cry it was so beautiful (Crow singing it alone was already one of my favorite songs ever, and the two of them together… magic.)

Stevie and Sheryl have a new duet out, called “Prove You Wrong” and it’s a terrific little song and they sang it on “Ellen” on Wednesday and they nailed it.

Two amazing voices, together. Just beautiful. Man, I so want to see them both in concert together. 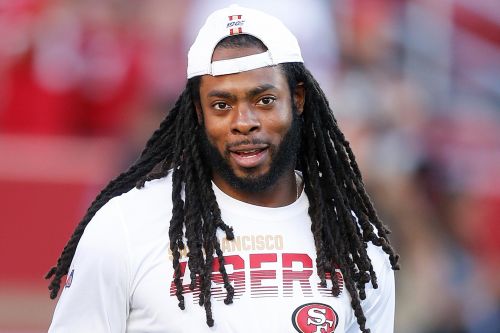 **And finally today, I’ve written numerous times in this space about the awful practice some school districts use, called “lunch-shaming,” where a schoolkid is denied food or embarrassed publicly in the cafeteria because their parents have outstanding debt.

So every time someone with means makes a donation to erase lunch debt, I get happy. San Francisco 49ers cornerback Richard Sherman recently donated $27,000 to eliminate the lunch debt in two different school districts, including the debt of a Santa Clara, Calif. middle school.

From the Yahoo! story: “Richard Sherman pulled me from my shift as a docent in the 49ers Museum to give me a personal check for $7,491.27 to cover Cabrillo Middle School’s cafeteria debt,” school principal Stan Garber said in a statement. “Richard’s gesture created such good will for the 49ers that they went on to sack Aaron Roger’s [sic] and the Green Bay Packers the next day on national tv by a score of 37-8.”

Following news of Sherman’s donation, the National Football League Players Association (NFLPA) named him as the Week 11 Community MVP. In addition to the over $7,000 to the Santa Clara school, earlier this month, Sherman wrote a check for over $20,000 to the Tacoma Public Schools in Tacoma, Washington to eliminate their student’s lunch debt, according to NBC Sports.

Outstanding job, Richard. It is so, so harmful to the psyche of these kids to be “lunch-shamed,” and it’s a blight on our society that it happens at all.

After enduring about 1 1/2 quarters of some of the most disgusting, disgraceful football you’ll ever see from a team (thanks, New York Jets, for nearly making me hurl what was a fantastic Thanksgiving dinner), I flipped over to ABC at 9:30 p.m. to catch what I hoped would be a terrific show: Spike Lee’s documentary on Michael Jackson’s legendary “Bad” album, from 1987.

It was sensational. It’s been a few years since MJ died so I hadn’t been thinking about him much, but when you think about how phenomenal that “Bad” album was, with five consecutive No. 1 singles, it boggles the mind.
I know there’s no way to measure something like this, but Jackson had to have had the greatest chasm in history between “incredible, once-in-a lifetime talent” and personal demons/screwed-up life.

The documentary, told through the eyes of most of the people who worked on “Bad,” basically illustrated how uniquely talented Jackson was; who knew that among his other many talents, he could’ve sung bass but chose not to? Who knew that he laid down all the harmonies and lead vocals together for his songs?

The man was a true genius, with his feet, with his voice, and with his musical brain.
Other things I learned from this doc, and I highly recommend watching it if ABC put it online…

— After years of wondering, now we all know who the heck “Annie” is, during the highly-addictive “Smooth Criminal” chorus “Annie are you OK?”  She is a CPR dummy that Jackson was working with while learning CPR during the writing of the song. Never in a million years would I have guessed that.
— The model at the end of “The Way You Make Me Feel” video was told not to kiss him at the end because MJ was shy.
–The funniest thing in the doc was seeing Sheryl Crow as a Jackson backup singer, with incredibly big hair. I know it was the 80s, but I never knew Sheryl rocked the Aqua-Net that much.
— Very moving sequence with everyone Lee interviewed getting choked up when talking about Jackson’s death. It’s obvious how almost everyone who worked with him loved and admired him.

We’ll never see anyone like Jackson again, and 25 years after “Bad,” it was great to be reminded of that. Bravo, Spike Lee.

**There are so many reasons to like Indianapolis Colts rookie QB Andrew Luck.
By every account, he’s humble. He graduated from Stanford in three years, but stayed a fourth year because he loved college football so much.
In his rookie season, while trying to replace the legend Peyton Manning in Indianapolis, he’s shown poise and accuracy in stunningly leading the Colts to a 6-4 record so far.

But here’s why I like Andrew Luck today: My good buddy Jeff Pearlman lives next door to a 6-year-old kid named Andrew Cohen, who cruelly suffers from a rare cancer called neuroblastoma.
The poor kid has had a rough life, but last year he took a liking to Andrew Luck, that really good Stanford QB.
Well, thanks to Luck being alerted, he sent Andrew this signed football to help him in his battle.
Look at that kid’s face. And then tell me that athletes aren’t role models, and can’t have an enormous impact with just a small little gesture.

**Finally, here’s to the most honest cabdriver in the world, from Thailand.
A man named Sia Ka Tian returned $900,000 left in his cab this week.

Sia Ka Tian, 70, found the money a vacationing couple left in his cab on Monday, and turned it all in to authorities. The grateful couple gave him a little reward, but I loved Tian’s quote.

“The money is unimportant to me. It doesn’t belong to me, so how can I use it?”