“Rock of Ages” wildly entertaining and ridiculous. A rap song about sippy cups. And Wimbledon, my favorite event, begins 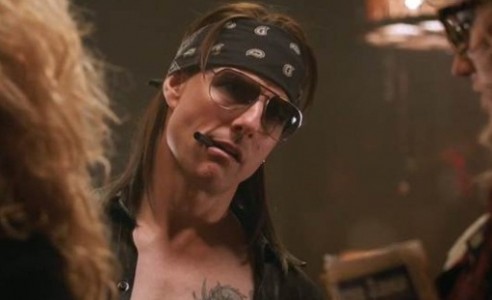 After enjoying the hell out of “Rock of Ages” on Broadway a couple years ago, there was no way I wasn’t going to see the movie.
And after seeing it on Friday night, I can happily report this: It’s thoroughly, awesomely entertaining, and also completely, utterly ridiculous. So, about what I expected.
If you saw the play, you know the story: Bright-eyed starlet comes to Hollywood in the late 1980s, takes a job at a famous dive bar, meets up and coming singer/bartender, and hilarity and heartache ensue.

Julianne Hough is no Meryl Streep here, but she does a good job in the Sherrie role. Diego Beneta gets the “Drew” role, and he’s OK.
And Tom Cruise, who I mocked and cringed about after he was cast? He was terrific as insane rock star Stacee Jaxx.
But the real revelations are Alec Baldwin and Russell Brand, who steal the show with a brilliant man/love relationship, culminating in a wonderful dance to REO Speedwagon’s “Can’t Fight This Feeling.”
There were way too many people in the movie (Bryan Cranston and Mary J. Blige were basically wasted in their roles), and of course the story was ludicrous, but man did my fiance and I have fun at the movie. We sang, out loud and in our seats, many of the great songs (there were only about 10 other people in the theater, FYI) that were the soundtrack of our Gen X childhoods.

No, it won’t win any Oscars. But I doubt I’ll have a better time at any movie this year.

**And now, something I feel certain you’ve never seen before: A 2-minute rap song about a kid having milk in his sippy cup.
You’re welcome.

**Ah, Wimbledon. When tennis nuts like me wax poetic about the splendor of grass, the strawberries and cream, the majesty of the All England Lawn Tennis and Croquet Club… God I love it. It begins today, and I actually tried to go in person this year for the first time ever (I toured the grounds on a trip to England in 2007, but it was in March, so, you know, not the same), but tickets were impossible to get. Still, I will get there one day.

As for this year’s tournament, I’m amazed at how many people in the tennis media are picking Roger Federer to win it. Don’t get me wrong, Fed is a God to me and I’d be as happy as any Fed-phile if he did win it again. But I feel like Novak Djokovic and Rafael Nadal are just pretty far ahead of everyone else right now, and I can’t see anyone but the two of them raising the trophy two weeks from now.

But hey, it’d be a fantastic story to see Federer win it. But the pick here in Djokovic on the men’s side, and, what the hell, Serena Williams on the ladies side.