The best “stupid criminal” surveillance video you’ll ever see. LeBron leaves Cleveland again, this time for L.A. And I’m bummed. And the funniest parent Tweets from those who’ve been there

It’s Monday, it’s 1,000 degrees here in New York, and nobody is thrilled to be at work, or wherever you’re reading this (I’m thrilled today because Wimbledon is starting, but I realize not all of you share my enthusiasm. Roger’s quest for Slam 21 is on!).

My point is, I think we all need to see this video (below). It’s of a couple of not-so-bright criminals, in Alberta, Canada, last week, who originally were just in trouble for trying to use a stolen credit card.

But watch what happens when the man and his girlfriend first get accosted by police, and please, if you’ve ever taken my advice on anything, watch at least until the 2:01 mark, where your humble blogger burst out laughing the first 12 or 13 times I watched this.

Ah, stupid criminals. They make me smile so often.

**Next up today, my wife saw this on Facebook the other day and it was so damn funny I had to share it with most parents I know.

It’s a collection of 37 hysterical parenting Tweets, from the website SlapLaughter.com, that anyone raising kids can relate to.

There are so many brilliant ones, and I highly encourage  you to read them all here, but I’ve pasted three of my favorites below. First up…

Then I also loved this one…

But as good as those were, this one was my absolute favorite and made me laugh the hardest, because I 100 percent believe this to be true: 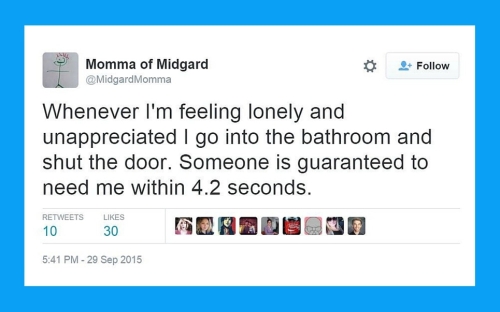 **Finally today, LeBron James is the greatest basketball player of all time.
LeBron James, this fall, will be playing for the fourth different team in his NBA career.

Something about those two sentences just doesn’t feel right. I know players have the right to play wherever they want, and free agency is a beautiful thing since athletes shouldn’t be forced to compete in a city or franchise they don’t want to, but I mean, really, LeBron?

If you don’t know what I’m talking about, Sunday evening it was announced that LeBron had spurned Cleveland for the second time, and was signing with the Los Angeles Lakers.

I dunno, just seems… weird.
My good friend Tony, though, as big a LeBron lover as I am, saw it different. He told me Sunday night in a text that, look, he’s got a terrible owner in Cleveland, a screwed-up front office, not much talent around him, and he’s tired of carrying the load for them. He goes to L.A., lives the Hollywood life, has some good  young talent on his team like Lonzo Ball and Brandon Ingram, and maybe they get another superstar to come play with him.

In other words, Tony says, you can’t blame LeBron. Guy won a title for the Cavs, and dragged a terrible roster all the way to the NBA Finals last year.

Maybe Tony’s right. But you know, the Western Conference is WAY harder than the East. Golden State and Houston are still damn good, and there are good young teams like Utah and Minnesota coming. And there’s no guarantee the Lakers will be better than Cleveland was this year.

So, I guess we’ll see. As a big LeBron fan, though, I was disappointed to see him move along, inevitable as some thought it would be.

I’ll still root for him, but playing on four teams in one career, for the greatest player ever will always seem odd to me.