As many of us search for answers as to why America’s students and schools aren’t performing as well as we think they should, journalist Amanda Ripley did something a little different, and wrote a book about it.

Ripley noticed that countries like South Korea, Finland and even Poland had students with much higher test scores on the international PISA test (a general knowledge exam that’s been given for decades to kids in a dozens of nations) than America’s kids did, and instead of just wringing her hands like so many did, she did a little investigating.

Ripley followed three U.S. exchange students, one studying in each of the trio of countries I listed above, during their year abroad, and used those kids as a jumping off point to see exactly why those nations are educating their kids so much better than we are.

The result is “The Smartest Kids in the World,” a book I just finished reading. I have to say, it was surprising, extremely interesting, and really well-written.

As a former journalist and current teacher I came into the book with some biases, and Ripley confirmed many of them. But she also opened my eyes to so much, including…

— students in South Korea do so well academically because, literally, all they do is study. Twelve hours a day, six days a week, year-round, South Korean students are pushed, pushed and pushed some more. As a result, their suicide rate is high and most of the kids are miserable.

— In Finland, it’s much more laid-back, but the standards have been steadily raised, teachers have gotten better and better, and students seem to enjoy learning.

— Of all the points Ripley makes in the book (I think some of her swipes at U.S. schools are unfair, but most are on point), what I found most intriguing was her argument for more difficult teacher training, and stricter standards for letting young people into college education programs.
She states that in other countries, only students in the top 10 percent, or top third, in their class get admitted to teaching “colleges,” and that they’re often subject to years of training. Why, she asks, do we let average or mediocre students throughout their scholastic careers do a few hours of student teaching, take a few classes on education, and then let them loose to educate our young for 30 years? Shouldn’t we make teaching a profession millions strive for, have to work really hard to attain, then train them strenuously for it? Then we should also make salaries for teachers high too, showing people how much we value them.

Dirty little secret: I think she’s 100 percent right. It is too easy to become a teacher in America (I should know, I became one in less than one year’s time). We should narrow the eligibility pool, and make it harder. Teaching shouldn’t be a fall-back career, as it is for so many; it should be as prestigious as being a doctor or lawyer, and until it is, maybe our schools are destined to be mediocre.

Look, I’m 100 percent NOT blaming teachers for the failures of so many schools; I know how hard teachers work and the insane level of pressure put on them. But Ripley’s point is a very fair one.

Whether you agree or not, her book is full of insights into other worlds; the chapter on the “secret police” that cracks down on South Korean after-hours study schools (called hagwons) is fantastic.

**Next up, I found this on Andrew Sullivan’s blog today and was fairly stunned by it, and quite surprised I never saw it given that it’s several months old.

Ted Chalfen, a senior at Boulder, Colo.’s Fairview High School, confirms during his graduation speech that he is gay, and then goes on to talk movingly about how well he’s been treated during his four years of high school, as a gay teen. 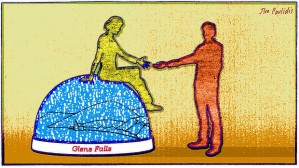 **Finally today, my friend Konrad Marshall is a wildly talented writer who I met back when I was working in Glens Falls, N.Y. Konrad is a native Australian who’d moved to upstate N.Y. because he’d fallen in love with a girl from there named Nikki. They got married, stayed in America for several years while Konrad chased his journalism dreams, then moved back to Australia about five years ago.

Konrad is a wonderful storyteller with a huge heart, which is why I feel strongly that you’ll enjoy this beautiful piece he wrote for The Age newspaper in Melbourne, about the devotion and love of his wife, who gave up everything she knew to go Down Under and start a new life with him.

It’s eloquent and sweet, and something any woman would love to read about herself from her husband or boyfriend. Take a few minutes and look it over; I practically guarantee you’ll feel better afterwards.