Tag Archives: The man with the golden arm

Good News Friday: A kindergarten teacher’s “Glue Stick Pledge” is hilarious and necessary. The most amazing blood donor ever gives his last pint. And a very cool welcome back for a Pittsburgh Pirates star.

And a Happy Friday, y’all. It’s mid-May, our new house is finally starting to look like our house as we approach moving day (and hey, I’ve met the mailman twice already so we’re off to a good start in a crucial lifelong relationship), and my toddler has finally learned to wipe himself after going No. 2. (Any toddler parent will tell you how much they miss wiping poop.)

So, you know, life is good.

Life is also good if you’re a kindergarten teacher trying to teach your kids not to eat their glue sticks, or otherwise use them for purposes other than gluing.

Meet Emerald Amethyst, aka Miss Barton, a kindergarten teacher extraordinaire who runs a blog called The Kindergarten Chronicles. A few weeks ago she wanted her students to learn to treat their new glue sticks with respect. So she had them take The Glue Stick Pledge, which made me laugh out loud, many times. (My favorite part is the “circular motions” explanation)/

Here it is, and I’m sure many, many elementary school teachers could relate (Update: Barton said in the week after the pledge, only one glue stick died. Good job kids!)

**Next up, the story from the New York Times’ new “Good News” website page, as they’re clearly stealing my ideas.

So, I like giving blood. Makes me feel good, costs me less than an hour of time, and maybe it helps someone in need. I’ve probably given blood, oh, maybe 100 times. I’ve got nothing on a man in Australia named James Harrison.

He says he doesn’t like needles. But according to this excellent Times story, “He’s given blood every few weeks for 60 years, for a total of 1,173 times. 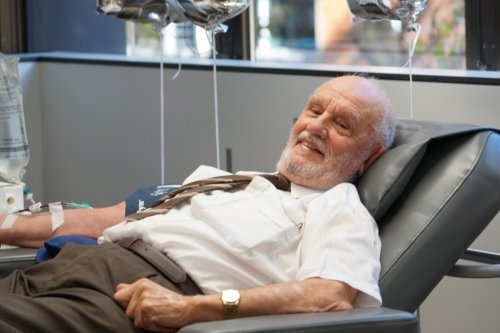 When he was younger Harrison’s blood was found to contain a rare antibody necessary for a pioneering medication that could help prevent fatal diseases in children. Medical officials say his blood has helped save more than two million babies from a potentially fatal disease.

Despite his distaste for needles, Mr. Harrison has donated in locations across Australia. Last Friday, he made his final donation in Sydney. Medical officials decided that it was time for Mr. Harrison to protect his own health.

Mr. Harrison’s selflessness has been widely praised. He has received the Medal of the Order of Australia for his longtime support of the Australian Red Cross Blood Service. Now, researchers are working on a “James in a Jar project,” with the goal of synthetically creating antibodies that match what Mr. Harrison produces naturally.

Harrison wanted to keep going. What an amazing, selfless human being. And what I keep thinking? Do you know how many tiny bottles of apple juice and crappy crackers this man has eaten, at the recovery station after each donation?

**Finally today, professional athletes move from one team and city to another so frequently, it’s easy to forget how many of these men and women make indelible marks on their towns. Especially when they’re a star player who stayed a long time, and happens to be a hell of a human being.

Andrew McCutcheon was a star on some really bad Pirates teams, then helped finally make them better and reach the playoffs. They never won the World Series, but McCutcheon was a huge reason they are no longer an embarrassment. After nine years, an MVP season and many other great moments, McCutcheon was traded to San Francisco in the offseason. But he came back to the Steel City for the first time as a member of an opposing team last week, and this is what happened when he walked to the plate.

A beautiful tribute to an all-around good guy. You could see how moved he was. Great, great moment.