A surprisingly awesome movie version of “The Blind Side.” And getting ready for U.S.-Canada, Part Deux 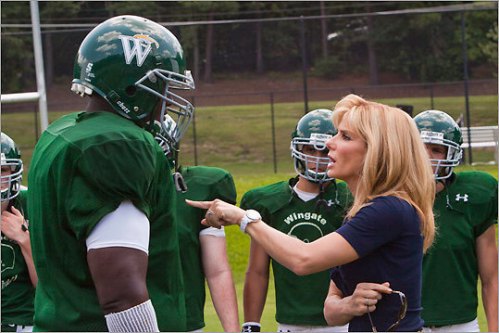 So I’m sure I’m not alone when I tell you that I never, ever see movies made out of books I read.

I just have found that the movie is never as good as the book . I end up comparing the movie to the book the whole time I’m in the theater, and that’s not enjoyable at all. I get mad when they change stuff, and I just feel like I’m annoyed for the whole two hours.

Oh, there are rare exceptions when the movie is as good as better. One Flew Over the Cuckoo’s Nest. The Godfather. But really, most of the times I leave the cineplex angry.

So that said, I really had no interest in seeing “The Blind Side,” the Sandra Bullock movie that everyone told me is fantastic. I read the Michael Lewis book (I try to read everything my namesake writes; moniker courtesy and all) about a young, homeless black kid who is taken in by a white, Christian woman and her family, and eventually becomes a football star. The book was brilliant; taught me a lot I didn’t know, and it was an uplifting story that really wasn’t cloying or treacly.

But, Saturday afternoon, on a rainy day here in Central Florida, my wife and in-laws wanted to go to the movies. So I saw “The Blind Side.”

And I was shocked at how good it was, and how much I enjoyed it.

Sandra Bullock, who I haven’t liked since “Speed” and who will never be confused with Meryl Streep, was fantastic. Strong, beautiful, with great comic timing and a terrific chemistry with the kid who played Michael Oher, the mountainous teenage football player. I thought Tim McGraw was good, too, and the little kid who played McGraw’s son, SJ, stole the movie with his great lines.

The writing was good, it was really funny at times, it was pretty darn faithful to the book, and toward the end, when I expected a sappy, cliched finish, it took me in a different direction.

I can’t believe I’m saying this, but I think it really does deserve to be up for Best Picture at the Oscars next week. I don’t think it should win, but it was a damn good flick.

**Random movie interlude: In one of the previews for “The Blind Side,” I saw that Topher Grace was going to be in a new movie. And I’m wondering: What the hell happened to that guy? He was so good in that Dennis Quaid movie a few years ago (“In Good Company”) that I thought for sure he’d be a leading man, A-list star soon. And then … nothing. Strange.

**OK, today is the biggest hockey game in U.S. international play since some 1980 game people keep talking about (ha ha). In a rematch of the 2002 gold-medal game, Canada and America play for bragging rights, with 33 million Canadians hanging on every pass and shot.

I’m beyond psyched. Will it be like last Sunday’s game, when the boys from the 50 states were totally outplayed, but pulled out a 5-3 win? Or does Canada, facing as much pressure as a team could possibly face, not wilt under that pressure but thrive, and finally win?

I have no idea. My gut says Canada wins, because they have to. But I’ve been underestimating this American team for two weeks now. Ryan Miller has to play  fantastic in net for the U.S., Patrick Kane must play big up front, and the U.S. defense must hold the Canada power play off the scoresheets. That happens, we win.

And 33 million Canadians will cry. Sounds OK to me.